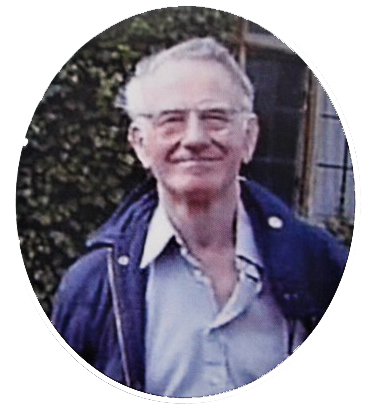 It is with our deepest regret that we have to report that Dr Nigel Balchin, the Society’s first Newsletter production editor, sadly passed away on 27th December 2017.  Many family members will have known Nigel, who contributed greatly to the success of the Society since it’s inception. It is, therefore, only fitting that we give an insight into Nigel’s very full life.   The following is an edited extract from the funeral address given by Ruth Bond at Nigel’s funeral on 25th January 2018.

Nigel was an only child born in Sevenoaks, Kent in 1933 and attended school there together with his cousin Owen Clarkson, 3 years his senior. Owen had come to live with the Balchin family. Owen is still actively living in Kent.

Nigel became a Cambridge man who loved and centred his life around the city for 60 years. He finally made his home in Sawston in 1981.

Nigel completed his National Service with the Royal Signal Corps. In 1953 after having won a scholarship he came to Gonville and Caius College, Cambridge.  He read the National Science Tripos and later was to gain a PhD in metallurgy.

As a student his secret claim to fame was to be part of a 12-man team who hoisted an Austin 7 car onto the roof of the Senate House in June 1958. Nigel maintained that his part in the stunt was small as it was a team effort. In reality he was one holding the steadying rope attached to the car and without him it would not have worked. This prank has gone down in the annals of Gonville and Caius College and Cambridge University history as probably the most ingenious student prank of all time. In 2008 the original members of the group reunited for the 50th anniversary of the prank, with most making the meeting. This spectacle made headlines around the world at the time and can still be read about in books and on the internet.

Nigel went on to work in Metal Research where he was senior lecturer at The Welding Institute and Babraham Hall Institute.  He wrote a book on health and safety when arc welding, from which royalties continue to come in. He also wrote and edited course modules for the National Extension College.

It was whilst in digs that Nigel met his most dear and loyal friend Ann Baker when they were both about 25 years old. It was their love of music which began a lifetime of friendship which endured. She and her family and friends featured large in his life.

Over the years Nigel was associated with many Cambridge clubs and group serving on the committees of most of them.  He played a major part in the IVC, Inter Varsity Club, and for many years he collated and posted the bulletin to all the members.

He was a keen member of the Bridge group and regularly hosted evenings. He helped set up the Coffee Pot Club, was a member of the Cambridge Ramblers, the Industrial Archaeology Society, Family History Society, the Royal Aeronautical Society.

Nigel was exceptionally good at research and delving into the past. He was deeply involved from very early on, with the Balchin Family Society, it having been founded some 25 years ago. This was evident in the family tree he produced with several others of the Balchin family. This family tree is 40 feet long and some of it he computerised. He was the first production editor of the Balchin Family Newsletter and he worked on this for around 20 years until 2015.  In September 2017 he was made an honorary life member, of which he would have been so proud.

He retired in 1989 and took advantage of the coming years to travel and to enjoy life.

Flying became his passion. He often visited Duxford Imperial War Museum and kept every edition he ever bought of the Pilot magazine. When he eventually did learn to fly, to fulfil this dream, he was deemed too old to fly solo.  So, he took to the air with an instructor, joined by Ann sitting behind, as he flew over the countryside.    A flight over London as a gift from the IVC, when he relinquished his editorship of the bulletin, was very special to Nigel.

When the Simon Jenkins book, “England’s Thousand Best Churches” was published this proved to be Nigel’s blueprint for travelling around the country to visit these churches and engage in his photography.

He had a great interest in the two World Wars which was kindled when trying to find the grave of Ann’s uncle, who was killed in the first World War. He went on many trips to the battlefields and war graves and experienced the ceremony at the Menin Gate.

Many people will have known Nigel mostly from one of the numerous activities that filled his life- whether, researching family history, playing bridge, enjoying his eclectic taste in music or in one of his many other guises.  To his friends and acquaintances, he would have seemed a quiet and private individual; yes, he was, but he was also a very loyal and helpful man who was always ready to help his friends and other people too.

It was a privilege to have known and have had Nigel in our “Family”.