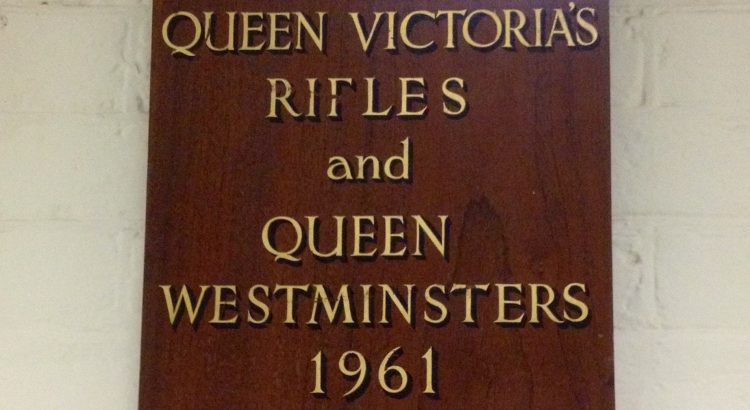 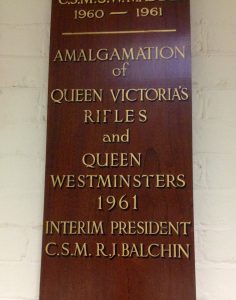 The Queen Victoria’s Rifles could trace their origins back to the old volunteer regiments of the Napoleonic Wars when the Duke of Cumberland’s Sharpshooters were formed as a Corps of Riflemen on 5 September 1803.

In 1908 the Territorial and Reserve Forces Act came into effect and the new Territorial Force was created. At this time the regiment amalgamated with the 19th Middlesex (St Giles and St George’s, Bloomsbury) Volunteer Rifle Corps to form the 9th (County of London) Battalion, London Regiment (Queen Victoria’s Rifles).

After the WWII, the Queen Victoria’s Rifles was merged with the Queen’s Westminsters to form the Queen’s Royal Rifles on 1st May 1961.

The Queen’s Westminsters were an infantry regiment of the Territorial Army, part of the British Army. Originally formed from Rifle Volunteer Corps, which were established after a French invasion scare of 1859. The unit became part of the newly established London Regiment on the formation of the Territorial Force in 1908. It was subsequently amalgamated in 1921 with the Civil Service Rifles, and became a territorial Battalion of the King’s Royal Rifle Corps in 1937.

The regiment was founded on the formation of the Volunteer Force, raised by the Duke of Westminster and named in honour of Queen Victoria in 1860.

Under the Territorial Force in 1908, the battalion was included in the new all-Territorial London Regiment, taking its place as the 16th (County of London) Battalion, The London Regiment (Queen’s Westminsters).

Shortly after the WWII, the Territorial Army was reconstituted and the 11th and 12th amalgamated to form, simply, The Queen’s Westminsters. On 1st May 1961, it was amalgamated with the Queen Victoria’s Rifles to form the Queen’s Royal Rifles.

If anyone has any information on Company Sergeant Major R. J. Balchin we would be very pleased to hear from you.