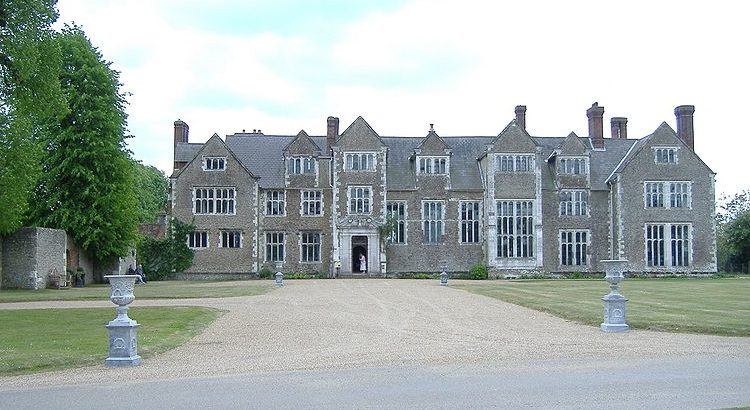 The 2009 Balchin Family Society Gathering was held in the elegant and picturesque surroundings of Loseley Park, home of the More and More-Molyneux family since 1568 and in the heart of Balchin “territory”. We learnt that the family estate was “saved” by Balchin intervention. More about that later.

Our incredibly industrious researcher Jenny Dixon told us about the many Balchin connections in the area, including the Gunpowder Works at Chilworth. Established by the East India Company in 1625, Chilworth Gunpowder Works was one of the largest, most prestigious and longest-lived powder mills in the country.

It was one of the most significant suppliers of gunpowder to the Government but, after the end of the First World War, the massive downturn in the demand for explosives resulted in the closure of the factory in 1920.

One of the main highlights this year was the discovery of Admiral Sir John Balchin’s HMSVictory by Odyssey Marine Exploration. Like most things nowadays a certain amount of controversy surrounds such findings with ongoing negotiations between the MoD, Odyssey and National Heritage concerning what should happen next.  Although nothing much remains of the structure of the ship, the Society hopes that some personal family artefacts of Admiral Sir John may one day be recovered.

Ted Balchin gave an interesting and informative account of HMS Victory, a first rate ship and the pride of the British Fleet. Admiral Balchin’s Victory was a somewhat larger vessel than her successor, now in dry dock at Portsmouth.  HMS Victory had entered Service some 7 years before that fateful night in 5th October 1744. She carried 100 bronze cannon ranging from some sixteen 6 pounders to the unique and rare 42 pounders with their 7 inch bore (17.8 cm), weighing 3.3 tons (3,353 kg) and approx 10 feet long (3.05m). The raising of one of the twenty-eight 42 pounders helped to confirm her identity as HMS Victory.  These cannon were decorated with the arms of King George I, inscribed with the founder’s name (Schalch) and dated 1726.

Sir Bob Balchin spoke of his dealings with MoD, English Heritage and Odyssey who have continued to keep him informed of progress. According to a 1744 edition of the Dutch Newspaper “Amsterdamsche Courant” HMS Victory was carrying £400,000 of gold coins, estimated to weigh approximately 4 tons. The bullion has only added to the difficulties in balancing the argument between archaeological recovery and salvage. This is also a grave in which lie between 1,150 and 1,200 men, some of whom were the sons of the most influential people in the country at that time.  Such was the faith placed in this highly respected and revered Admiral who was one of the most accomplished and experienced seamen of the age. The loss sent shockwaves across the Nation to such an extent that songs were written and a memorial to Admiral Sir John Balchin was erected in Westminster Abbey.

Dr Nigel Balchin presented an edited version of the Odyssey exploration video which was well received by all.

Sir Bob provided an update on Sir Rogon de Balchen. He had commissioned an artwork of the tiled effigy discovered on the tombstone of Sir Rogon at the site of the Abbey of Lieu Dieu in France. When the tomb was discovered by archaeologists in 1978 the tiles had unfortunately been disturbed and replaced hap haphazardly, possibly during reconstruction of the church in the 17th century. Sir Bob’s artwork showed how the tiled effigy of Sir Rogon would have looked in its entirety. The tiles have never been displayed and still today reside in the basement of the museum at Abbeville. Bob is working with Mme La Conservateur to generate more local interest in an effort to persuade the museum to fund the preservation and display of what is the only near complete example of a tiled tombstone in existence.

Many of the members availed themselves of a private tour of Loseley House which still remains an agricultural estate and business. The tour took in the Great Hall, library, drawing room and bedrooms. The Manor of Loseley was purchased by Sir Christopher More during the reign of King Henry VII but the present house was built by his son Sir William More during the years 1562-1568 in the reign of Queen Elizabeth I. The Mores of Loseley became the More-Molyneux’s in the late 1600’s during the marriage of Margaret More and Sir Thomas Molyneux.

Now what about that “Loseley” connection? Most people will be aware of Loseley House from Loseley Ice Cream, which I am pleased to say we had the pleasure of consuming as part of our dessert, but few knew of the Balchin connection. Jenny  knew the answer.  During the 18th Century the house passed to Jane More-Molyneux after the death of her unmarried brother Col. Thomas More-Molyneux and the death, in rapid succession, of her two elder sisters.  By the time that Jane took over the house finances had suffered from the extravagances of her brother Thomas. The More-Molyneux’s were in serious financial trouble and it looked like they might lose the Loseley estate. Fortunately Jane was an extremely capable and resourceful woman. During the 20 years that she “ruled” she leased as much of the estate land as she could.  John Balchin leased a considerable acreage of land, including land up to the front of the house, along with several ponds which were a local source of fresh fish at the time. The cost of the lease, which was normally for 14 years, was substantial for that time. John was obviously a good businessman and farmer, for over the years he made the land work for him and he would have been a major employer in the area. So if it wasn’t for Jane and the support of John Balchin the story of Loseley House may have been a very different one. One without that delicious ice cream!

Jenny had received a personal collection of family letters, documents and photographs which have been kindly donated to the Society by The Revd Michael Balchin, who unfortunately couldn’t attend.  We learnt that Michael’s father Ronald was in the Merchant Navy and had been a prolific writer during his life, including writing some moving poetry. Tragically Ronald died when Michael was 2 years old. When Michael was old enough he joined the RAF and later became a clergyman.  After some years Michael decided to change his “flock” for a rather “woollier” kind by moving to Wales, where he currently lives, as a shepherd.

This short view on the Balchin Gathering 2009 gives only a flavour of the presentations and discussions that took place. Particular thanks to all the family members whose continuous hard work made this a most memorable occasion.

Please think about coming along in 2010, meet old friends and family and view some of the Balchin archives. It truly is a warm and welcoming Family Gathering.