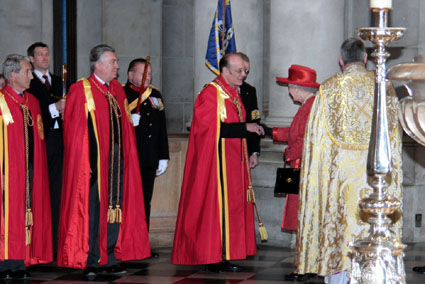 On November 13th 2008, Sir Robert Balchin, 11th Knight Principal of The Imperial Society of Knights Bachelor, welcomed on behalf of the Society, HM The Queen, its Patron, accompanied by HRH The Duke of Edinburgh, to St Paul’s Cathedral for the Centenary Service and the Dedication of a new Chapel of the Knights which had been created under Sir Robert’s supervision during the previous two years.

For the Centenary Service a new Anthem by Sir John Taverner had been commissioned and was performed by the St Paul’s Choir. The English Schools Orchestra played, as did the State Trumpeters of the Blues and Royals and of the Coldstream Guards. The lesson was read by Sir Robert Balchin. Numerous members of the Balchin Family Society were present and Dr Thomas Balchin carried the pennon of the Knight Principal.