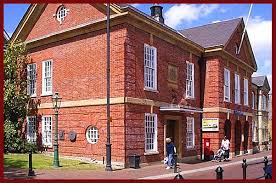 Our 2014 Gathering held at the Borough hall, Godalming, was presided over by two of our best known Balchins, Admiral Sir John Balchin and Richard Balchin, Surgeon of Godalming.  How so, you may ask?  Well, as prominent past citizens of Godalming, their portraits hang in the Borough Hall, and so kept watchful eye on our proceedings.  It also enabled us to have a good look at these portraits and Bob and Jenny supplied extra information to add to our study.

The day of the Gathering certainly brought some surprises, not least because a number of people who had booked to attend had succumbed to a variety of illnesses and were not able to be present.  This reduced numbers rather a lot.  Among those not able to attend were Eric and Diana, who had intended to deliver some of the talks planned for the day.  However, in true Balchin spirit, so much new information emerged that time ran out on us.

Like so many organizations, one of our main objectives this year was to honour the memory of members of the family who had fought in World War One  and everyone had something to contribute which made for a really interesting and moving session.

Although not able to be present, Jill and Gordon Bryant, from Bramley, had sent in information about Frank Balchin of Bramley, who died in 1916.  This included a picture of Frank, published in the local newspaper shortly after his death and a copy of the will that he made just before going into what was to be his final battle.  This poignant document, only seven lines in length, struck a chord with all those present, particularly as Anne Balchin explained that soldiers were issued with ‘will forms’ just before battle and special arrangements were  made to dispense with the need for these documents to be witnessed.  This was a sobering thought, and something of which most of us were unaware.

Also unable to be present were Roy and Iris Balchin, but like Jill and Gordon, Roy and Iris had also sent in fascinating information.  This included a marvellous account of the life of John Richard Aubrey Balchin MC, including an astonishing list of those who trained with Balchin in the newly formed Machine Gun Corps.  As ever, Roy’s wonderful writing really captured the imagination.

Anne Chapman told us of wonderful family information that she had unearthed, not just information but she had discovered a relative she had not previously met, Frances Irene Dunn, née Balchin, who had been born in 1914.  Anne plans to visit her new found relative and learn more about her long and eventful life, including time spent as a mechanic in World War II.

Bob updated us with the latest information of Balchin’s Victory and also introduced a new family puzzle.  Tom had come across a picture of a Mr. Balchin, mace Bearer to the Mayor of Stamford in Lincolnshire and last Town Crier of Stamford.  So far we in the BFS know nothing of this member of the family, so, true to form, the Gathering produced yet another Balchin mystery to be solved.

Although the day had started off showery, by lunchtime it was a really nice sunny autumn day.  Jenny had told something of the history of Godalming and the sights and scenes the many Balchins of Godalming would have witnessed so, after lunch we all set off to see some of the places she had mentioned.  Among them were the great coaching inn, The Kings Arms, whose visitors had included Peter the Great, Czar of Russia and, in 1814 during the celebrations of what was then thought to be the end of the Napoleonic Wars, Wellington, Marshall Blucher and many of the crowned heads and leading politicians of Europe.

After our tour of Godalming it was back to the Borough Hall for tea, wind up and farewell to the portraits of Richard and Admiral Sir John, before setting off home.  An eventful day that once again yielded all kinds of new information. 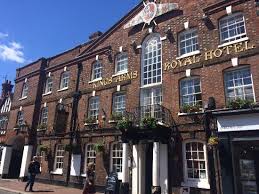 The The King’s Arms 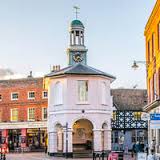 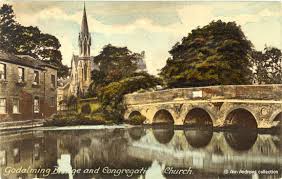 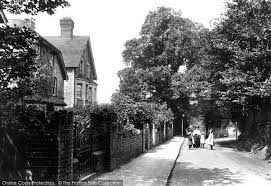