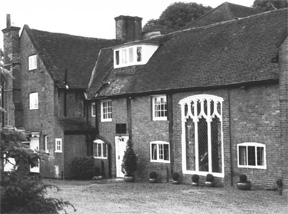 CEDAR HOUSE, Cobham, Surrey is a handsome large dwelling built in red brick and  carefully sited near the Rover Mole but above its flood plain. It was originally a timber  framed open Hall, dating from the 15th century.

A 17th century wing was added at right angles facing the river; at the same time it acquired its beautiful ornamental iron gates supported by tall brick piers with pineapple finials.In 1790 its owner Joseph Moss died and passed the house to his niece Elizabeth Balchin, the second wife of John Balchin of the Vanhurst line.

John Balchin died at Cedar House in 1821 and his daughter Elizabeth inherited it. She married The Revd Philip Vaillant Rector of Stoke d’Abernon and died in1827 when Cedar House sadly passed out of Balchin hands. It was given to the National Trust in 1938, was once leased as a hotel and is now leased as a private dwelling again.