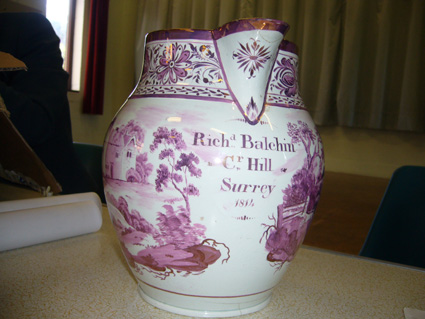 The 16th annual Gathering was held on Sunday 12th September, 2010, at Mayford Village Hall near Woking in the heart of Balchin territory on a warm and sunny day.

In the hall Dr. Nigel Balchin had a display of photographs of military medals, while the main Balchin archives and the family tree were also available to browse.

Sir Robert Balchin’s opening remarks reminded us that there have been Balchins in Surrey for over 800 years, and during the day we heard about some of them, as well as those further afield.

Anne Chapman discussed her research concerning Balchins in Lydd in Romney Marsh in Kent, while Diana Beamish gave a talk on her father, Michael Balchin, working for the London County Council in the mid-twentieth century.  Other items of interest during the day included the news of the sale of a Balchin store in Georgia which had closed in the 1960s and then had not been touched until the sale on 5.6.2010, when the contents, including many items which would be museum pieces, were dispersed.

Jenny Dixon gave a fascinating talk on two Balchins who had risked scandal and being ostracised by their families as they had been divorced in the nineteenth century, a virtually unheard of event at that time.  Other topics she had researched were the Balchin connection with the Vaillant family of Stoke d’Abernon in Surrey and Balchins in various trades.

In the afternoon after the AGM Sir Robert Balchin brought us up-to-date on the latest news of the “Victory”.  The ship lies 300 feet under water and bringing up the artefacts would take a year and would cost 12 million dollars.

In the meantime, not only does the sand shift around her, but also she is subjected to trawlers dragging nets over her, not to mention interest from other ships.  Odyssey (the company who found her) want to start retrieving artefacts from the spring of 2011 and exhibit them in the new National Museum of the Royal Navy in Portsmouth in 2012.

The piece de resistance was unveiled towards the end of the afternoon – a lusterware jug, which Jenny Dixon had bought on e-bay, decorated with a rural scene and with the name Richard Balchin of Surrey and the date 1814.  We clustered around to examine this wonderful find, which made a memorable ending to a very enjoyable day.