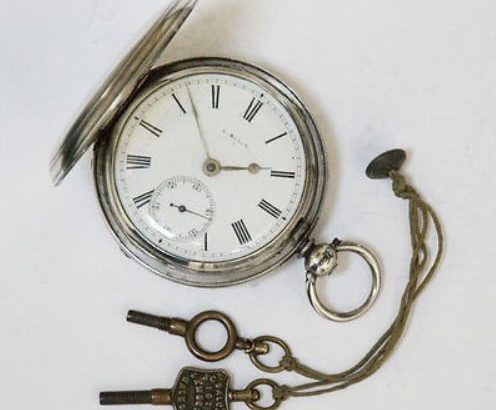 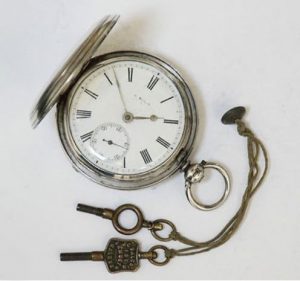 Here we can see an 1883 Hunter pocket watch made by the same maker, complete with original keys for winding and handset, attachment cord and lapel button.

The watch case is 5cm in diameter (excluding its crown) and is fully hallmarked with the lion passant, leopard’s head for London, date letter ‘H’ in a shield (signifying the year 1883) and the maker’s mark ‘SS’, possibly for the silversmith, Selim Samuel. 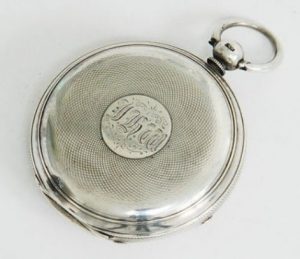 The outer lids are engine turned, the front having a monogram in gothic script in the centre cartouche. There is very slight age-related wear, as one would expect. 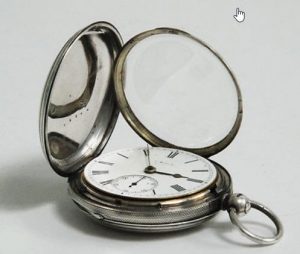 All the lids close securely and have the number 79399 stamped on the insides, which corresponds to the movement number on the workings. The dial and the protective glass are free from any chips, cracks or scratches. On the dial is the faded and worn script of the family Watchmaker himself.

The movement is an English lever escapement with a jewelled ruby end stone. Etched on the movement is J C Balchin, 162 Lambeth Walk, London SE and the number 79399. 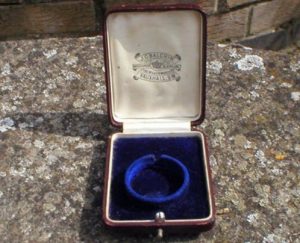 The Case is a wonderful push button clasp box with purple velvet to inner base which lies flat when open. Cream silk to inner lid with a crown and retailers name printed in black.

The logo reads ‘J. C. Balchin, Watchmaker & Jeweller, 195 Wandsworth Road, Vauxhall SW. This box is not for a Hunter as above, as the diameter of watch space is 36mm. Measurement of box is 81mm x 64mm x 20mm. 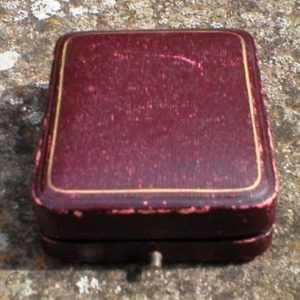 JC Balchin was at that address in 1921, according to the London Street Directory for that year. Little can be found about JC Balchin, but it seems that he was probably Josiah Charles Balchin. This is presumed from a notice found in the London Gazette from a year later (30th May, 1922).

‘NOTICE is hereby given, that the Partnership heretofore subsisting between us, the undersigned, Henry Balchin and Henry Josiah Charles Balchin, carrying on business as Watchmakers and Jewellers, at 5, Manor-parade, Sutton, Surrey, under the style or firm of ‘H. BALCHIN & SON,’ has been dissolved by mutual consent as from the 6th day of March, 1922. All debts due and owing to or by the said late firm will be received or paid by the said Henry Balchin, and such business will be  carried on in the future by the said Henry Balchin. As witness our hands this 23th day of May, 1922. HENRY BALCHIN and HENRY JOSIAH CHARLES BALCHIN.

(Henry) Josiah Charles therefore had operated from two London premises that we know of, and then moved to Surrey in partnership with his son, Henry, who then took over the family firm from this date.