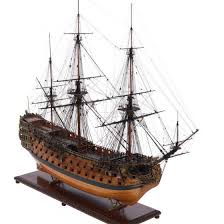 There is a contemporary full hull model of the Victory (1737), a 100-gun three-decker first-rate ship of the line. (Scale: 1:34.3) located at the National Maritime Museum, Second floor, Nelson Navy Nation Gallery

The large scale of the model would support the theory that this was once part of the equipment of the Royal Naval Academy at Portsmouth Dockyard, and used for the educating of young gentlemen to the sea-service. In fact in 1742, six of these young gentlemen wrote to the Navy Board complaining ‘the model of the Victory is so small, her rigging so slight, that we cannot learn anything from it, neither do we know anything of rigging or the stowage of anchors or cables, we are quite ignorant of everything that belongeth to sails’.

They petitioned the use of an old yacht, converted to two mast to improve them in the art of the rigging of ships and their request was granted. The Victory itself was built in the Royal Dockyard, Portsmouth and measured 174 feet along the gun deck by 50 feet in the beam and had a tonnage of 1921 (builders old measurement). In 1744, a formidable fleet, commanded by Admiral Sir John Balchen in the Victory, was sent to relieve Gibraltar and drove the French fleet into Cadiz. He was returning to England when his fleet was scattered by a violent gale on 4 October. So much damage was done that the Victory was lost with all hands, nearly 1200 men, in the Western Approaches.

Our thanks to Chris Heal for highlighting this to us.