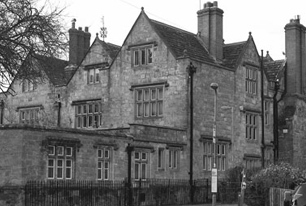 The 2011 Gathering, held on Sunday 11th September, a sunny day, at Lord and Lady Lingfield’s house, New Place, in Lingfield, Surrey, was a gathering with a difference. Following the AGM, held in the garden, members were taken in two groups on a fascinating guided tour of the house by Lord Lingfield.

New Place was built of stone in 1617 around a mediaeval core, which had been the Chancellor’s House of a monastic building, but when Lord Lingfield bought it some thirty years ago, it had been derelict for many years previously – in fact the local postman remembered playing around the walls and lighting fires there when a boy! The restoration of the house had to spread over decades e.g. with work being done three days a week, the restoration of the doors, woodwork and panelling alone had taken sixteen years.

There were a number of Balchin family heirlooms, such as the table on which Lord Lingfield’s great-grandfather Thomas Balchin had often seated ten for dinner, and a portrait of Lord Lingfield when younger by John Bratby RA. His parliamentary robes worn in the House of Lords were also on display.

There was an intriguing carved newel post showing a previous inhabitant of New Place with his nineteen cats, a carpet with the Lingfield coat of arms and a clothing chest which had belonged to King George I, and several other royal items: a cigarette case of George V and an umbrella of Edward VIII. There were also some chairs from the investiture of the Prince of Wales in 1969, and two from the Coronation of King George VI in 1937.

Two of the items seen, the Victory model and the Civil War painting, are described in detail in Issue 35, January 2012 Balchin Family Newsletter.

All items had a history behind them and all were described by Lord Lingfield with a touch of humour.

Members also enjoyed sandwiches, a cream tea and home-made cakes, all delicious, all organized and made by committee members. At the end of the afternoon Lord and Lady Lingfield were thanked for their very kind hospitality.