On a bright sunny day two dozen of us assembled in Alfold village hall for the 2016 gathering and AGM.  We were delighted that two members from overseas, Anne Gatland (sister of David Balchin, who organises the technical side of our Newsletter) from Michigan and her daughter Leigh Kraus from Colorado, were able to join us.

We were welcomed with coffee (and pastries and biscuits) from volunteer “caterers” for the day, Tina and Rob Balchin.  Lord Lingfield welcomed us formally to the gathering and then the first item was Jenny Dixon’s update on computerising the family tree.  The handwritten tree, unrolled on a few tables across the hall, was available to view at lunchtime.  Exact dates of birth, marriages and deaths can be added to the handwritten tree, but, for those who were born less than 100 years ago, the digital tree will only have the year of birth, marriage and death, so that no one can use the dates for illegal purposes.

Jenny continued with her discoveries from e-bay  –  some surprising items for sale were a couple of 1960s newspaper articles (without an exact date or note of the publication) from the Thanet area of Kent.  One showed a couple of schoolboys, one of whom David Balchin in the audience recognised as himself!  The other photo included his sister!  (These newspaper articles, needless to say, did not sell!)  (Full article appears in The Balchin Family Newsletter Issue 45, January 2017.) Jenny had also brought along a family photo album compiled from c. 1930 to the late 1960s, which included an Irene Balchin.

Then Diana Beamish spoke about some sibling cousins of her father’s, and how information was gradually gleaned from the internet.  (Full article appears in The Balchin Family Newsletter Issue 45, January 2017.)

The AGM followed , after which there was time to browse photographs, etc. brought along as well as the tree.

We then had a wonderful lunch around tables in a horseshoe shape decorated with cyclamen plants.  After the ham, salmon, new warm potatoes and salad we made room for the apple pie with custard and cream – and even cheese and biscuits.  Our grateful thanks went to Tina and Rob for such a delicious meal.

In the afternoon we were treated to a talk by Dr. Sean Kingsley, a marine archaeologist, who related fascinating details of “HMS Victory” and a postscript of a few other wrecks.  From 1550 B.C. there have been 37,000 wrecks around Britain, with 6000 of these on the seabed.  There are 45 wrecks that are protected, but unfortunately not “HMS Victory”.  We could have listened for hours!   (Full article appears in The Balchin Family Newsletter Issue 45, January 2017.)

Tea and cakes ended the gathering at the hall, but a number of us assembled afterwards at Alford Church, where several Balchins are buried (including Diana Beamish’s great-great-grandparents, James Balchin, who died on 27.10.1876, and Mary Ann Balchin née Dicker, who died on 18.3.1870). 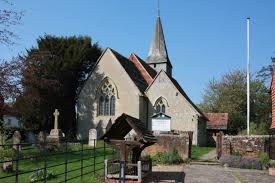 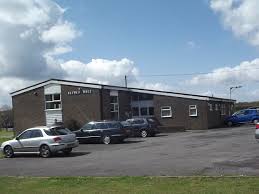