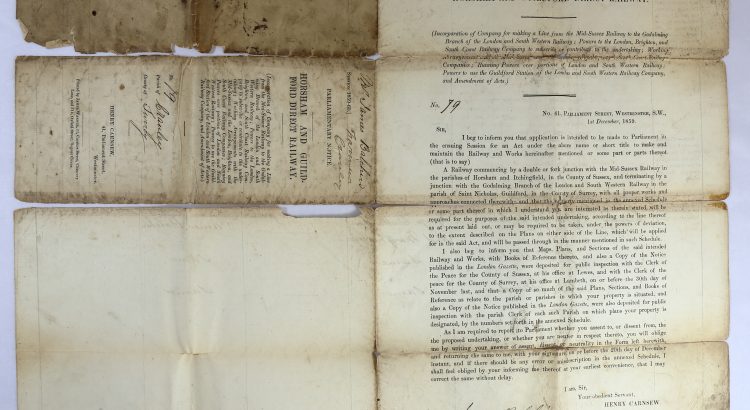 Copy of the Parliamentary Notice for the 1859-60 Session concerning the Horsham and Guildford Direct Railway.

The application is for land to build a line from Mid-Sussex Railway to Godalming Branch of the London South Western Railway and also the working arrangements and running powers with existing railways. The land was owned by George and Mary Clutterdew and occupied by James Balchin. The land in question is stated as appearing as No. 170 – Meadow; No.172 – Arable and No. 173 – Meadow on the plans, although these are not available. James Balchin was born in Chiddingfold (baptised 8th July 1804) and married Mary Ann Dicker on 23rd December 1823, both making their mark. James died in Alfold on 27th October 1876. James and Mary were affected by the deviation as they were farming two pieces of meadow land and some arable land.

There were 31 objections from 84 landowners but only 4 presented petitions. The possible railway was presented to Parliament on 16th February 1860 and The Horsham and Guildford Direct Railway Act was passed on 6th August 1860. The line was built 1860-1864 and opened on 2nd October 1865. It was the death knell for the Wey and Arun Canal (Christ’s Hospital Station on the line opened on 28th April 1902 with 7 platforms!)

The line closed on 14th June 1965 and much of the line is now part of the Downs Link long distance footpath and bridleway.